Hearing about success stories of entrepreneurs can be inspiring — but they can also throw you off-course. Here’s how to avoid that:

Every once in a while, we hear an inspiring rags-to-riches story of an entrepreneur who rose from the bottom all the way to seemingly unreachable heights. Sometimes, it’s a young business tycoon-in-the-making who came up with a million-dollar idea and ran with it. Other times, it’s a luckless entrepreneur who gave the art of business one last shot, and was rewarded with success they never imagined.

On other occasions still, it’s a longtime businessman who implemented one small change in their business operations — a change that would prove to be remarkably effective in taking their enterprise to the top.

These stories are meant to motivate us and to inspire us. “If this entrepreneur can, so can I!” More often than not, though, they also serve as unwelcome, self-imposed warning signs — or worse, expiration dates. After all, who wouldn’t feel the pressure to do ridiculously well at business upon hearing the success story of a startup led by a newbie half your age?

Who wouldn’t be persuaded to follow in the footsteps of that one successful entrepreneur by making the same organizational changes that they did, regardless of whether or not said changes would be a good fit for your business? And who wouldn’t be inspired to keep soldiering on after hearing about that one businessman who never gave up — even when things are clearly going south for you, and quickly getting out of hand?

The truth about entrepreneur “success stories”

Here’s the problem. Those stories that talk about people who supposedly succeed in their business ventures within such a short period of time? They hardly ever tell the whole story.

If you think success REALLY came that easily to anyone who “tried hard enough” — if you honestly believe that entrepreneurs who claim to be enjoying 7-figure profits on a monthly basis are giving you all the dirty details of their path to success — you are terribly mistaken.

More often than not, it wasn’t just their determination or resourcefulness that allowed them to achieve the success they enjoyed. In some cases, it’s knowing the right people and reaching out to the right benefactors. Sometimes, these success stories are about entrepreneurs who were either already successful in some other area of life, or had the financial advantage or sufficient clout to charge into business with the bravado of an unapologetic daredevil.

And therein lies the danger of putting too much faith into these entrepreneur “success stories”: They unintentionally become deadlines — and unhealthy benchmarks for success.

When you start comparing yourself to others who, due to a combination of factors that simply cannot be anticipated, have met a significant degree of success at an impressive stage in the game, you begin doubting yourself when you fall short of goals that may be a bit too challenging and unfair for yourself to begin with.

You might end up quitting that business idea after just 3 months because you weren’t seeing the returns you were expecting, or stubbornly hold on to a terrible business idea, hemorrhaging your finances until you realize that you should have let go and tried something else early on.

Why you shouldn’t be fooled by #entrepreneur “success stories”:

Why the only success story that should matter is yours

Now, I’m not saying that all of these success stories are a load of baloney. Far from it, in fact — I do believe that these can inspire us and point us in the right direction. However, when you start closely patterning your business operations and style to whichever instant success story you choose, you are putting your enterprise at risk. Instead of focusing on a strategy that would work for your brand, you’re too busy trying to ape someone else’s.

I recognize that it’s a stretch to tell you not to compare yourself to others. I think being competitive is ingrained in our DNA. In times of doubt, however, here are a few things you should remember to stay on track and never lose sight of the goal.

Just because it worked for another entrepreneur doesn’t mean it would for you, too. There is no be-all, end-all approach to business. It takes considerable skill and patience to meet success. If it happens for you at a shorter time, great! If it doesn’t, well, don’t give up just yet. No one’s chasing after you.

2. Identify opportunities — and dead ends, too.

In the same way that we have to be sharp and attentive enough to identify opportunities as they come, we also need to be able to tell if what we’re doing is no longer worth it. There’s no use in pushing for a business idea if you know it’s just not going to work.

Things are not going to magically be all right, just because of your grit and gumption. Sometimes, a bad idea is a bad idea. Being a good entrepreneur means knowing how to distinguish the good from the bad.

3. Learn not just from success stories, but also from cautionary tales.

The world of business is full of just as many stories of failure as — or perhaps, even more than — tales of success. You would do well as an entrepreneur to learn from these experiences.

Don’t blindly accept every seemingly amazing business story at face value.  Instead, learn as much as you can from others’ ups and downs, so that you can avoid the mistakes they made.

4. Accept your limitations — and find a way to work around them.

Everyone has different resources, connections, and capabilities. Not everyone has access to the same tools and advantages as a lucky handful of so-called “instant success stories.” The sooner you come to terms with the fact that there are just some things you can’t do with your business, the easier it will be for you to figure out ways to compensate.

How #entrepreneur success stories can actually lead you off-track:

That said, it’s time for you to start crafting your own entrepreneur “success story.” And to do that, you need to learn how to maximize the resources you have on hand. Start with your social media accounts — specifically, the content you publish on Facebook, Twitter, and other platforms. Check out my collaboration with Skillshare, How to Create Engaging Social Media Content, to learn how you can skillfully craft high-quality content to get you a better ROI.

Liz Azyan is a digital consultant who helps public organisations and businesses add value to their products and services through smart digital solutions. She has been awarded the Google Fellowship Award for her work and initiative in the arena of technology, politics and social entrepreneurship. She has also been listed on several lists around the web as a top digital expert by her peers and industry leaders.

Brands benefit from reminding their fans that they’re people, too. Here’s how some of the best brands project their human side on social media.

Is your social media marketing management still on track? Maximise the medium’s potential by steering clear of these time-wasting practices.

Social Media Consultancy: The Whys, the Whats and the Hows

Here’s a comprehensive guide to the attitudes, knowledge, and skills you need to equip yourself with to become a pro at social media consultancy.

This class wowed me. It’s very hands-on, to the point, no time wasting and full of valuable information. I can’t wait to put it to use. 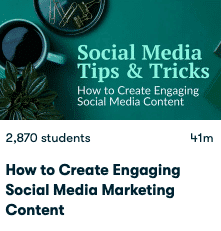